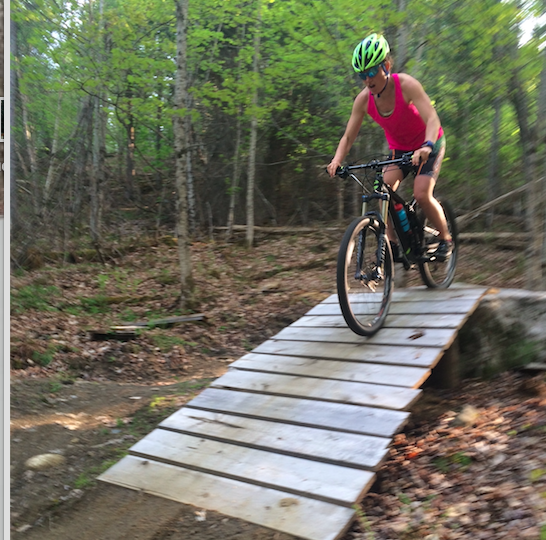 This is another blog post that has been brewing for a while, but I needed to wait till the right moment to write it, until I’d conquered enough fears to make it feel like I was actually making headway into being less scared of everything. (Of course, two days before I finally published this post, I had my first fall while going downhill on rollerskis, but, turns out, I was just fine). I do now feel like I have made some steps in the right direction and am becoming more confident about going downhills on skis, rollerskis, bikes, my feet, etc.

Just to be clear, I’m not very good downhills. I might not be quite as bad as I think I am, but regardless- I’m bad at them. But I do want to get better at them! I’m the queen of snowplowing. And taking my sweet time running down mountains. And not wanting to jump off rocks or go off ropeswings. Or do other things that many think of as fun.

But this summer, this seemed to change a little bit and I have a little less fear than I did six months ago. I feel like I made more of a concerted effort this summer to improve on them and it is paying off. I know that this is one of the biggest obstacles that I face in becoming a faster skier and that it is an issue that needs to be addressed.

But first, to kick things off, snowplowing has been my trusty companion for a while. Surprisingly, I couldn’t find any really good snowplowing pictures, though they certainly do exist.

I have had a few nasty crashes over the years that make my fear slightly legitimate. But every skier has had them, and most go down hills a lot faster than me!

But now for what this blog post is really about!

Right before heading back to Craftsbury in May, Heather, Patrick, and I took a trip to hike Camel’s Hump. Armed with yak trax, we successfully navigated our ways up and down. It was my re-introduction to hiking after getting hurt last summer and a blast!

Rollerskiing is an integral part of every Nordic skier’s training plan. Rollerskiing consists of big hills, pavement, and cars. Not exactly my cup of tea. Last year, I spent most of my time on rollerskis alone, because I couldn’t keep up. This year, before the first ski of the spring, I was so nervous my stomach hurt. On that ski, I went in to the first hill, where I ordinarily I would snow plow, and followed Kait and Susan right down it! I was beaming for the rest of the day. The next day, I went down the hill in to East Hardwick, which reduced me to tears each time last year, and made it all the way to the mini ponies that Kait had been promising me the whole ski (and all of last year). Once again, the smile wouldn’t leave my face.

Mountain biking is another part of training for a skier that isn’t as important as rollerskiing, but is a fun way to mix up training in the summer months. My mountain biking is often reserved for dirt road cruising, but when the Center was hosting the Craftsbury Academy middle school mountain bike club, I decided that I needed to get over myself and actually get better at mountain biking.

These two girls were awesome. Both were timid at some points, but where also willing to send it when they felt comfortable and progressed so much over the course of a month. The week before, the girl in pink fell head over heels on this hill, but was begging us to let her do it again the next. And, with lots of encouragement, got her friend in the red to do it as well! These two were inspiring to me and reminders that even if you are scared, you can still do it.

One afternoon early this summer, Ollie offered to take Heather, Kait, and myself biking and teach us with some basic skills and help general bike comfort. We practiced various types of corning and ended the day with this tabletop. I really didn’t want to do it, but was convinced. I biked up to it, started to say “oh fu-“ but before the word was out, it turned to “that was so fun!”

Earlier this year, when I thought about doing biathlon, my initial thought was “no way. I am not rollerskiing with a rifle. And I am not going to Talent ID camp and rollerskiing on a rollerski track. That will be really embarrassing.” Turns out I did all those things this summer. In Lake Placid in June, we did have to ski on the rollerski loop, though not very much with a rifle. Still, I was scared. The idea of cornering and carving and letting the track take you with it scared me. I spent a solid half hour with Olympian Andrea Henkel practicing downhills. But, I survived the camp and the little bit of rollerskiing on the loop that we had to do. And would have been almost content letting the rifle and rollerskis not meet again.

But then, biathlon trials. On rollerskis. On a rollerski track. I still wasn’t sold on it. And was still petrified at the thought. In July and August, we traveled as a team to Jericho several times, and I slowly became more comfortable with the idea, so long as I could snowplow several times throughout the race. The second race was a mass start, which I was dreading, but it didn’t turn out to be that bad, especially because I took my time at the start, beginning the race in last place. Despite my apprehension and cautious-ness whole thing actually ended up being pretty fun!

Another cross training activity that one would not generally consider “scary:” rowing. Mid summer, Heather and I decided to row a double together, with Brooke as our personal coach (and photographer). At first, I was the one who was setting the pace and tempo, with Heather following, and it just wasn’t working. I couldn’t figure out how to get far enough forward at the beginning of the stroke, the catch. It was a fear of really committing to it and going for it. When we switched spots and I was able to mimic Heather, it worked out a lot better.

This relates to my other big skiing goal of the summer: working on weight shift and getting my hips forward. Both of these involve commitment to being on one ski (or rollerski) at a time and allowing the ski to glide. Like rowing, this isn’t scary in the “something awful could happen” sense, but requires being comfortable and confident enough to put all your weight and power on one ski.

This picture was taken on the spot where I slipped and hurt my knee last summer. This is on Mt. Elmore, right near the fire tower. In August, Heather wanted to do the Elmore uphill run time trial on her own, and I agree to accompany her, with the stipulation that we needed to go to the scene of the crime so I cold prove to myself that it would be ok. Heather did her time trial, then we ran up to the fire tower, and carefully, holding hands, traversed the rock where I slipped a year before. And nothing happened. It was a pretty monumental day in my mind.

In September, the whole team spent two and a half weeks in Europe, splitting the time in Slovenia and Austria. In Austria, we skied on the Dachstein Glacier, the same as the previous year. Last year, the trip was a bit rough for me and skiing was pretty painful, so working on downhills was a huge challenge. I think I spent more time snowplowing up corners than anything else. This year, I feel like I made a little bit of progress on the corners, especially when I was able to follow my more nimble teammates.

Another Austrian fear. The rollerski loop in Ramsau. I had rollerskied last year on classic skis and it was not a fun experience. Rollerski tracks are generally designed for skate skis and I was super timid, so it was an altogether bad combination. This year, I was terrified on the day we skied there for the first time. I was totally silent in the van (a rarity for me) and I was dreading the workout. Kait was my “tour guide” of the track and it really wasn’t that bad at all! We even went on a walking-on-rollerskis tour of the uppermost, scariest loop. The next time we rollerskied, I tucked down the S-turns! One day, we did intervals that consisted of a downhill, tight corner, and uphill in to the range. The first half of them I snowplowed down the hill, then Emily convinced me that tucking would be ok (and much faster). She was right. This picture is from the range, because there are no pictures of us skiing.

In Slovenia, we jumped in to the Slovenian Biathlon Summer Championships, which was a neat experience. The women’s field was tiny, but included two Olympians and I had some really good shooting on the mass start day. The range approach was a steep downhill, which I was nervous about, but it turned out to be just fine, even though this picture is a bit ridiculous looking.

When we got back from Europe, I had a little time at home in Craftsbury then went to Lake Placid to train with the Biathlon National Team for a few weeks. I got to go on a few fun hikes while I was there, and run amongst rocks and leaves.  Though I’m slower than most that I hike/ run with on the descent, it makes me really happy that I’m able to do it!

This is a text widget. You can use text widgets to display text, links, images, HTML, or a combination of these. Edit all of these widgets in the Customizer Widget section.